The rapid growth in industrial and residential sector leading to huge demand for electricity is driving the growth of the global Business Rules Management System market. According to International Energy Agency (IEA), the energy consumption around the globe grew by 2.3% in 2018, which was almost twice the average growth rate observed since 2010. This can be attributed to growing global economy along with rising demand of cooling and heating due to climate change across the world. The highest amount of energy is consumed by the industrial segment around the globe. 8945 TWh of energy was consumed by the industry segment in 2017 as compared to 8699 TWh during 2016. The second major sector to consume highest amount of electricity is the residential sector with 5775 TWh of energy consumption in 2017 to that of 5680 TWh in 2016. Similarly, commercial and public services consumed 4637 TWh, transport segment with 364 TWh, whereas, the other sectors consumed 1651 TWh collectively during 2017. With growing amount of energy consumption, the CO2 emissions pertaining to energy production grew by 1.7% to 33 Gigatonnes during 2018. The majority of the emissions were emitted by coal power generation plants, contributing to 30% of the total energy-related CO2 emissions. This has driven many regulatory authorities to induce numerous policies and regulations in order to reduce carbon emissions. Our report on the global Business Rules Management System market includes energy trends assessing the overall energy system amidst rising uncertainties and implementation of renewables owing to increasing demand for clean, sustainable and environment-friendly form of energy generation across all regions of the world. The global Business Rules Management System market is estimated to observe significant Y-O-Y growth rate in 2027 as compared to this year.

Our report on the global Business Rules Management System market comprises of in-depth assessment of market size (both by value and volume) and segmentation along with quantitative and qualitative analysis to identify future market position in the next 6-7 years. Apart from laying down notable business opportunities, the report includes recent trends, competitive analysis to understand market strategies adopted by different manufacturers, and growth drivers and challenges that are impacting the growth of the market. Moreover, multi-dimensional analysis of the Business Rules Management System market is carried out by implementing PESTEL and SWOT analysis. 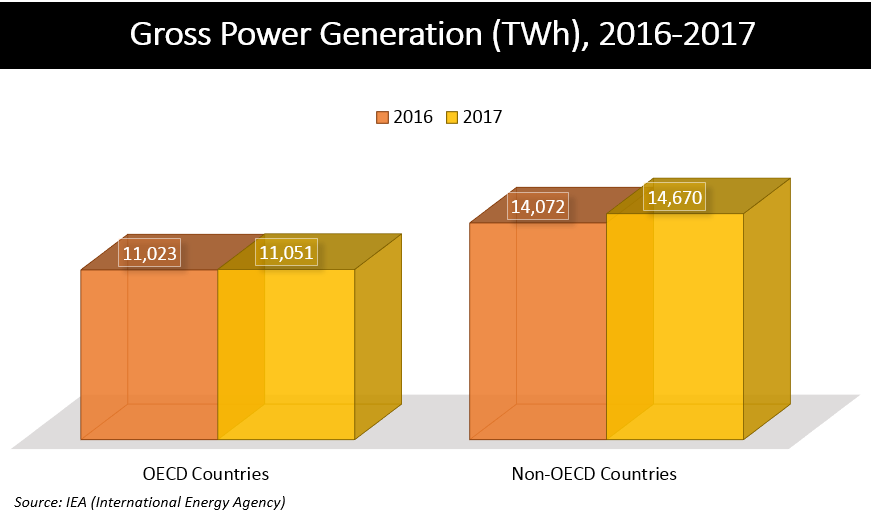 The contribution of natural gas and renewables in transforming the worldwide energy sector is impacting the growth of the global Business Rules Management System market. Additionally, the electricity trade between the neighbouring countries is becoming common since past few years. The notable trade is witnessed in OECD Europe, where electricity imports grew from 406 TWh in 2016 to 408 TWh in 2017. In the same year, China, India, Russia and Brazil were the four leading electricity consumers in non-OECD category with a total contribution of 37.2%, out of which, China recorded the highest share of 46.7% of the overall non-OECD consumption. The total electricity consumption in non-OECD countries was 4.6% higher (11854 TWh), whereas, OECD countries witnessed an increase of 0.2% (9518 TWh) in 2017 as compared to 2016.